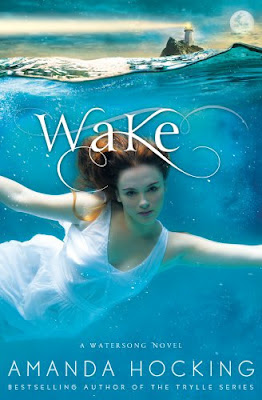 Gemma seems to have it all—she’s carefree, pretty, and falling in love with Alex, the boy next door. He’s always been just a friend, but this summer they’ve taken their relationship to the next level, and now there’s no going back. Then one night, Gemma’s ordinary life changes forever. She’s taking a late night swim under the stars when she finds Penn, Lexi and Thea partying on the cove. They invite her to join them, and the next morning she wakes up on the beach feeling groggy and sick, knowing something is different.

Suddenly Gemma is stronger, faster, and more beautiful than ever. But her new powers come with a terrifying price. And as she uncovers the truth, she’s is forced to choose between staying with those she loves—or entering a new world brimming with dark hungers and unimaginable secrets.

First, I want to thank St. Martin's Press for sending me an ARC of WAKE!

Was I blown away by WAKE? ABSOLUTELY. I should also start off by saying that I first read Amanda Hocking when she was self-published, and I fell in love with her books then. So when I first heard about WAKE coming out, I did a fan-boy dance.

The concept of WAKE is very engaging. I've always loved being in the water and swimming, so a character who swims constantly plus Amanda Hocking's incredible writing style and story-telling makes for a happy reader in me. And I absolutely loved how she described the trio of the girls who are beautiful and deadly. Her details (she didn't over-detail, though) of every single character -- especially the trio -- were absolutely fantastic.

Gemma's sister was by far one of the best siblings I have ever read about in a book. She's very protective of her little sister and only wants the best for her. Unfortunately, Gemma doesn't always listen to her sister, which results in something deadly occurring to her.  And once you find out what exactly what that thing is, I guarantee you that your mouth will fall open.

Amanda Hocking's writing style makes you feel like you are walking around this city with all of these characters and swimming in the ocean with the main character, Gemma. And I seriously read almost half of this book in one sitting -- which is actually very rare for me to read so much of a book in just one sitting. But come on, IT'S AMANDA HOCKING. One of my favorite authors of all time.

And after that ending, I am dying for the sequel, LULLABY, so bad. WAKE leaves on a pretty big cliffhanger and LULLABY is a necessity in my reading world.

Overall, I HIGHLY recommend you pick up WAKE. This book promises to be the start of an epic and fantastic series!