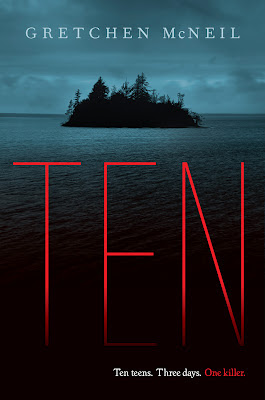 And their doom comes swiftly.

It was supposed to be the weekend of their lives—an exclusive house party on Henry Island. Best friends Meg and Minnie each have their reasons for being there (which involve T.J., the school’s most eligible bachelor) and look forward to three glorious days of boys, booze and fun-filled luxury.

But what they expect is definitely not what they get, and what starts out as fun turns dark and twisted after the discovery of a DVD with a sinister message: Vengeance is mine.

Suddenly people are dying, and with a storm raging, the teens are cut off from the outside world. No electricity, no phones, no internet, and a ferry that isn’t scheduled to return for two days. As the deaths become more violent and the teens turn on each other, can Meg find the killer before more people die? Or is the killer closer to her than she could ever imagine?


I can't even begin to explain how much I love TEN! TEN is a fast-paced thriller, with jump-out-of-your-seat moments, secrets that will shock you, and an ending that will terrify you until the very last page.

I should start off by saying that i read TEN in one night: start to finish. I couldn't put it down! McNeil composed a mystery novel in which all of the events in this book actually made sense. She did a terrific job with this novel, and I would recommend it to anybody -- mystery lover or not!

Our main protagonist Meg is a very likeable character. She's always there for her friends, always wants to help out, and is always sharp on the tack. Especially when it comes to murders around her. I never once found her to be annoying or idiotic, like some characters are in books that feature murders. Minnie, on the other hand, is a very completely different story. She's quick-tempered and will push anybody aside to get what she wants. Minnie is definitely not the best of friends in YA literature.

And the whole thing with a serial killer murdering these ten teens on an island cut off from the rest of the world . . . mind equals blown. If you don't know, TEN is an inspired story by Agatha Christie's AND THEN THERE WERE NONE. I thought that Gretchen did a great job at tackling that very popular mystery novel, and I wanted more and more after I read the last page! Fantastic!

THE. ENDING. No spoilers here, but GUYS. WOW. My jaw was literally open for the entire final fifty pages. McNeil had me on the edge of my seat; I was even checking over my shoulder to make sure the killer wasn't standing behind me! Love it when a book makes me do that! And like I said before, everything makes sense in the end! Didn't see a bunch things coming in this novel.

One last thing before I end this review: somebody in Hollywood, PLEASE buy the movie rights to TEN! This would make a killer movie! (no pun intended) Thrilling, captivating and scary; TEN deserves to be on the big screen!

Overall, TEN is one of my favorite novels of 2012! If you want a novel with secrets and betrayals, shocking moments and terrifying conclusions, TEN is definitely the book you should buy!