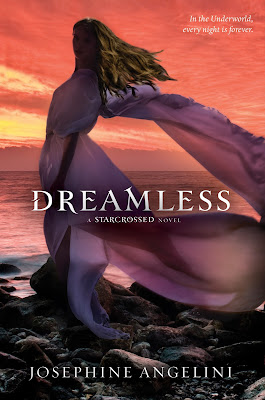 Can true love be forgotten?

As the only scion who can descend into the Underworld, Helen Hamilton has been given a nearly impossible task. By night she wanders through Hades, trying to stop the endless cycle of revenge that has cursed her family. By day she struggles to overcome the fatigue that is rapidly eroding her sanity. Without Lucas by her side, Helen is not sure she has the strength to go on.

Just as Helen is pushed to her breaking point, a mysterious new Scion comes to her rescue. Funny and brave, Orion shields her from the dangers of the Underworld. But time is running out--a ruthless foe plots against them, and the Furies' cry for blood is growing louder.

As the ancient Greek world collides with the mortal one, Helen's sheltered life on Nantucket descends into chaos. But the hardest task of all will be forgetting Lucas Delos.


DREAMLESS is a great and spellbinding sequel, with just a few slow moments here and there. And this is coming from a person who cannot stand slow moments in the slightest.

DREAMLESS has just so much action crammed into these pages; even the first chapter is insane for everything that happens! Josephine Angelini never once let up on the action, and I didn't want to put this novel down! The suspense, drama and action in this sequel were just outstanding, and I had to know how it ended.

One thing that put me off from reading this at first was that a love triangle was being introduced. At first I was like, "I thought Helen and Lucas were starcrossed lovers? Seriously? A new guy is showing up that's trying to win Helen's heart?" But let me tell you, Orion (the new love interest) is just awesome! He seems to be a pretty cool guy, and he literally saved Helen! You'll find out how once you read this series, which you must!

The characters in DREAMLESS grew in many ways tremendously. Helen finally became stronger and wiser, and was ready to stand up for herself. Lucas was sort of a jerk in this book, but I understand why now. Again, read the book and you'll understand, because I don't want to spoil the book for people who haven't read DREAMLESS yet. Josephine Angelini put a lot of thought and effort into these characters, and I really appreciated that!

Like I said before, slow moments can be found in this series. But for some reason, I just didn't mind them at all; I just wanted to know how everything turned out for the characters (even though this is only book two). But DREAMLESS had tons of more action than STARCROSSED, which didn't have that many fast-paced moments in it.

The ending was just brilliant in this novel! So much action, suspense, character growth, and this massive fight scene was all in the final 100 pages, and I just flew through those pages! This series is so addicting!

Overall, DREAMLESS was such a great sequel that leaves me wanting the third book, GODDESS, so much! I can see why this series is so popular!