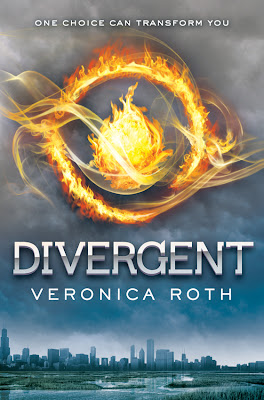 Beatrice "Tris" Prior has reached the fateful age of sixteen, the stage at which teenagers in Veronica Roth's dystopian Chicago must select which of five factions to join for life. Each faction represents a virtue: Candor, Abnegation, Dauntless, Amity, and Erudite. To the surprise of herself and her selfless Abnegation family, she chooses Dauntless, the path of courage. Her choice exposes her to the demanding, violent initiation rites of this group, but it also threatens to expose a personal secret that could place in mortal danger. Veronica Roth's young adult Divergent trilogy launches with a captivating adventure about love and loyalty playing out under most extreme circumstances.

I know. I am probably the last person to read DIVERGENT. But I’m so glad I waited. Want to know why? Because I can’t wait any longer for INSURGENT. That ending was so awesome, but such a cliffhanger!
DIVERGENT is a masterpiece. I read this almost-500-page novel in two days. This book sucked me into the story within in no time, and I found myself already caring for Tris and what might happen to her by chapter two. That is so hard for that to happen to me in a book.
And let’s talk about the characters. Tris has become one of my favorite characters of all time. I love how she gets what she wants and doesn’t whine over herself if she does something wrong. This line really stood out to me:
“I want to feel guilty for what I did. I don’t.”
I love her. And Four is perfect for Tris. He challenges her and pushes her to the limit in training, but out of the arena, the reader can clearly tell that sparks are flying. And you have no idea how much I hate Peter. And I can’t believe he did that to Edward! (if you’ve read DIVERGENT, you know what I’m talking about.)
If I lived in this dystopian world, I would choose Amity, the peaceful, as my faction. We don’t get to learn much about Amity in DIVERGENT, but we might in book two.
Overall, DIVERGENT is brilliant with fantastic characters and pacing like you’ve never seen before. Can May 1st just come already?
Posted by Unknown at 1:34 PM